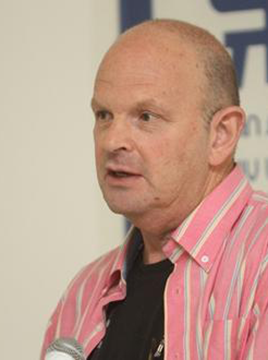 Οil and gas are ‘now a thing of the past’

Rarely do you meet an academic who is as radical and creative a thinker as Dan Rabinowitz. Formerly head of Tel Aviv University’s Porter School of Environmental Studies and chairman of Greenpeace Mediterranean, Rabinowitz is a professor of sociology and anthropology at Tel Aviv University. Also a faculty fellow at the Arava Institute for Environmental Studies and chairman of the Israeli Association for Environmental Justice, he spoke recently to Kathimerini about how outdated investments in oil and gas are and what the magic solution to the climate crisis is.

You are an expert in energy and the environment. What’s your opinion about the EastMed pipeline and the general discussion about new oil and gas fields in the Eastern Mediterranean?

It is talk of the past. We have embarked on the era of renewables because of the advances in technology that happened around 2018, while the momentum in oil and gas in the area developed between 2012 and 2017. It’s a twist of history. Everybody, including us in Israel, thought that there would be a bonanza. We were promised the world, lots of money to finance infrastructure and education and everything else. This is now blowing up in our face. Israel has just put on hold four new gas power stations that were in the pipeline. Natural gas, which everybody was celebrating 10 years ago, is now a thing of the past.

In Greece there is a lot of talk about EastMed, while new frictions with Turkey regarding continental shelf limits have to do with the ambitions of finding oil and gas.

It’s an outdated discussion. It will certainly be outdated in a few years. Well, a similar discussion is happening in Israel but it is really driven by the companies. They have invested a lot of money in the projects. But the game has ended before it started. They are wasting their time. They have to invest in solar energy instead.

Read also:
Police abolition and other revolutionary lessons from Rojava

However, despite the shift to renewable energy, you point out in your book that in 40 years’ time temperatures in Abu Dhabi, Dubai and Doha will be permanently above 35 degrees Celsius. What does this mean? Is it already a case of too little, too late with the energy transition?

Even if we stop burning hydrocarbons tomorrow, the CO2 that is already in the atmosphere will remain there for 80 to 100 years. So, we should definitely stop producing emissions as soon as possible. As for the temperature rise in the Middle East, it’s not the normal 35 degrees temperature but the wet-bulb temperature 35 degrees that accounts for humidity. It’s technical but it simply means that the feeling will be more intense than the normal dry-bulb temperature that we measure and experience. At this temperature level it is already impractical for people to spend any amount of time outdoors. Temperatures in the Middle East will go up by 6 degrees in the next few decades. In the summer temperatures will be over 50 degrees every day.

What would be the impact of a climate crisis in Greece, Cyprus, Turkey and the Eastern Mediterranean?

We are already seeing changes in the region. We see fewer rain events and the rain events that we do see can be very extreme. So we have lots of flooding. But even if you get the same amount of rainfall over a year and much of it comes in concentrated events, then the water doesn’t have enough time to seep into the ground and most of it is washed out into the sea. The water cycle becomes depleted. What we are also seeing and will see for the rest of the 21st century is that we will have more droughts. Consecutive years of droughts are called dry spells. The number of spells that are expected in the 21st century is going to be double what we had in the 20th century, when we had about 10 dry spells.

Should we worry about that?

Very much. In Israel we expect that the kind of vegetation that we now find only in the south of the country will start moving to the north, and at the expense of Mediterranean species of vegetation. The same will happen in Greece, Italy, France and Spain.

Could a drought cause a civil war?

The lack of resources caused by droughts leads to mass migration to the cities, civil wars, crossing borders to other countries, ethnic conflicts and tensions. Syria was not exceptional compared with other Middle East countries in terms of social and political problems that it had to face. But the chain of events that led to civil war can be traced to the five years of drought from 2006 to 2011. This event started a wave of migration to the cities that increased tension.

Can we say the same about the influx of migrants from Africa to Europe?

The influx of people from Africa northwards through Morocco, Algeria, Tunisia and Libya to the Mediterranean and then crossing the Mediterranean in all those boats to Greece, Italy, France and Spain certainly has a climate component in it. And the more climate change advances, the greater the number of people who will have no future in their territories.

Therefore, we don’t have any other choice but to accelerate the transition to renewable energy so disaster can be averted. In your book you suggest a radical solution to the climate crisis. Can you describe it to us in brief?

What I point out is that in a few decades’ time the Gulf states will face double trouble if they don’t act now. All major cities will have become uninhabitable because of temperature rise while oil and gas prices will have plummeted because they will have been replaced by renewables. Already today 70% of all new power stations are using renewable energy. So, what I suggest is that as they hold 30% of the global oil and gas market, they can accelerate the time of the transition to renewables so they can save the climate and save their economies. The Gulf states already invest in renewables globally. If they heavily increase their investments and manage to acquire a large chunk of the global renewables market, they can simultaneously dramatically decrease oil and gas production. In this way they will drive the prices up and accelerate the transition towards renewable energy. With this strategy the Gulf states will remain both inhabitable, because the climate crisis will have been mitigated, and almost as strong economically as they are today.

Read also:
The Petroyuan Is Here and Global Oil Markets Have Reacted Positively

How about extracting the excess CO2 out of the atmosphere by using some advanced geo-engineering solutions that are now under development?

We don’t know the side effects of such a large-scale operation, assuming that we really have the power to do such a thing. It has been suggested that we could throw calcium carbonate into the atmosphere to neutralize some of the carbon. But we don’t know how such an intervention would interact with the atmosphere. It might cause irreversible damage to huge areas. Also, advanced miracle solutions are one thing, but they should not push us into complacency. We should not waste time believing than nothing will happen, because if we don’t accept the urgency to take decisions, the change can be very devastating and pretty irreversible. We have to act now to mitigate the effects on climate by using large-scale renewable technology.