GREENS-SOLIDARITY: Congratulations for the election of Alexander Van Der Bellen 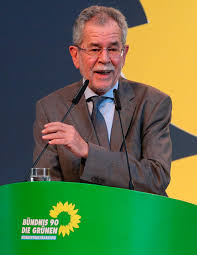 Congratulations for the election of Alexander Van Der Bellen

The GREENS-SOLIDARITY Bureau would like to congratulate Alexander Van Der Bellen, Austrian citizens, the Austrian Greens and those contributing to the excellent electoral campaign based on values, principles and ethos. This result is significant not only for Austria, but also for all of Europe, as it expresses a move towards a different Europe; a Europe of values, solidarity, cooperation and solutions. We hope the message conveyed in this campaign – “One who loves his country, does not divide it” – will spread across Europe for a reboot of the European process.

We believe that Alexander Van Der Bellen’s election as President of Austria is also a message against xenophobia, racism, austerity, division, corruption, isolation and the rhetoric of hate. A message that there is a different viable policy proposal based on coexistence and social inclusion, solidarity, sustainability, visional realism, finding solutions, cooperation and synthesis aimed at the reunification of societies, based on honesty and transparency, rights, participation and the deepening of democracy.

Thank you Austria! Thank you Greens!

On behalf of the “GREENS-SOLIDARITY”

The members of the Bureau