Will Green Party’s Success in Germany Ever Spread to Greece? 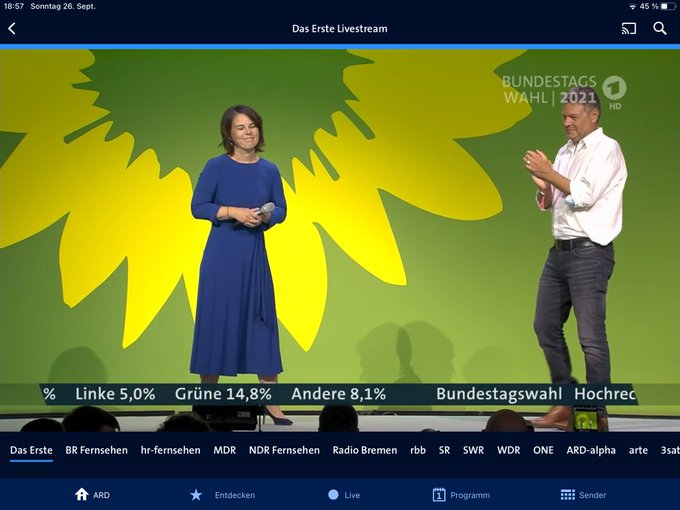 Greens and environmentalists in Greece celebrated the election results in Germany on Sunday, where the Green party increased its share of the vote and may determine the composition of the first post-Merkel era.

The Greens won 14.8 percent of the vote and elected 118 MP’s to Parliament, becoming the first party in the preference of voters below 25 years of age.

Nikos Chrysogelos, a former member of the European Parliament and a leading activist in the Green movement in Greece, says that the results in Germany “were not surprising.”

Speaking to Greek Reporter, he notes that there were a number of good results recently for the Greens in state elections which showed that there was a trend eventually confirmed in the general elections.”

The Greens, co-led since 2018 by Annalena Baerbock and Robert Habeck, have stated they want to make Germany carbon neutral as quickly as possible trough government spending and higher taxes.

They’ve had a profound impact on this election: They’ve channeled a growing frustration among Germans, especially the young, about climate change into a movement that’s forced Germany’s two largest parties to change their own platforms on this issue.

“There is a new generation which strategically has embraced the values of the Greens, not just in terms of the climate crisis but also on other issues such as solidarity, justice and democracy.”

Chrysogelos says that the Greens have deep roots in Germany and they now express a different approach to economic development. They have introduced into the public discourse new ideas, such as how cataclysmic changes in the economy can rectify injustices between the haves and the have-nots and improve social cohesion.

Greens growing in the rest of northern Europe

In recent years such ideas are being worked upon by many Green parties around Europe. “The idea of a perpetual economic growth as envisaged by established political forces is no longer viable,” the Greek politician says. “The current model where the emphasis is placed on the continuously increasing growth rate is not viable.

“We need to change the model. We need a new model which combines prosperity with less growth and consumption, energy consumption in particular,” Chrysogelos says, who acknowledges that this particular pledge in the manifesto of the Greens in Germany may have caused some fear among the general public.

He also notes that another factor for the Greens’ success in Germany is that the public realized the close correlation between the environment and public health, due to the coronavirus pandemic.

While the Greens may not have won the election, they are likely to have a key role in the next government, especially since the party and the SPD both expressed interest in joining forces. Whatever power-sharing deal finally emerges among coalition parties will influence Germany’s potential for future climate leadership.

Where are the Greens in Greece?

Whether in Austria, France, Iceland, Ireland or Germany, Green parties are gaining ground in Europe. The obvious question is why the Greens have not made significant inroads in Greece.

After all, the country is experiencing catastrophic fires every summer, scientists warn that the Mediterranean is becoming a tropical sea, and atmospheric and marine pollution are prevalent.

Chrysogelos acknowledges that although the Greens in Greece had major successes in the past, there is “discontinuity” which is due to the political culture in the country.

He notes that the early successes in the 1990s, when the movement was gaining traction, were disrupted by the wars in the Balkans. The Greens elected a Member of the European Parliament in the lections of 2009, which was shared by Michalis Tremopoulos and Chrysogelos himself. He notes that for a few thousand votes, the Greens failed to get representation in the Greek parliament in the elections of 2009 and 2012.

“Our ideas were gaining traction in Greek society, but our re-emergence as a real force in the early 2010’s was hindered by the political polarization due to the financial crisis in Greece,” Chrysogelos says.

“The green message was difficult to get across because anger was prevailing — anger about austerity and the bailouts imposed by the European Union and the IMF. In those extreme situations, a party such as the Greens with no great organizational experience, was being being sucked into the politics of anger. Our message could not be easily heard.”

He recalls that many party members and voters chose to join the leftist Syriza party at the time, instead of maintaining the party’s autonomy.

“Now,” Chrysogelos says, former Greens, who had allied with Syriza, “are rethinking their strategy and becoming more open for an autonomous Green party.” He points out that a popular forum called “Prasinoi”, which aims at promoting the dialogue between citizens and activists regarding green issues and the environment, is becoming the focal point of the movement in Greece.

Greens have now decided to participate in the next Greek and European elections as an independent entity, Chrysogelos says.

“I think that the Greens are gradually re-emerging proposing an alternative strategy for the future of Greece. The possible participation of the Greens in the next German cabinet will provide a different perspective not just in Greece but in the rest of Europe. Developments in Germany and Europe will have a decisive effect in Greece too.”

Coal and wind farms in Greece

Chrysogelos says that the Greek government’s pledge to eliminate coal by 2025 would have been positive if it was combined with a different model.

“In reality the government is trying to substitute coal with natural gas. Greece is increasing its consumption of natural gas, which is imported and substitutes coal in a period when the prize of natural gas is on the rise. It is the wrong approach not only from the energy and environmental perceptive but also for the financial perspective,”  Chrysogelos opines.

“Its emphasis on natural gas with costly infrastructure projects such as the EastMed binds the country’s energy policy for the next 40 to 50 years,” he adds.

The second problem with the government approach, he says, is the way it tries to implement the introduction of wind farms and other forms of clean energy.

“In Greece the process is the exact opposite of what happens in other parts of Europe. The investor, instead of the government, selects the area where he/she wants to invest. So, each investor invests where he may think it he will have better returns.

“This approach will backfire, as local communities are being ignored. Investors may be keen to construct wind farms on top of iconic mountains or small beautiful islands, but the nearby residents are not consulted,” Chrysogelos says.